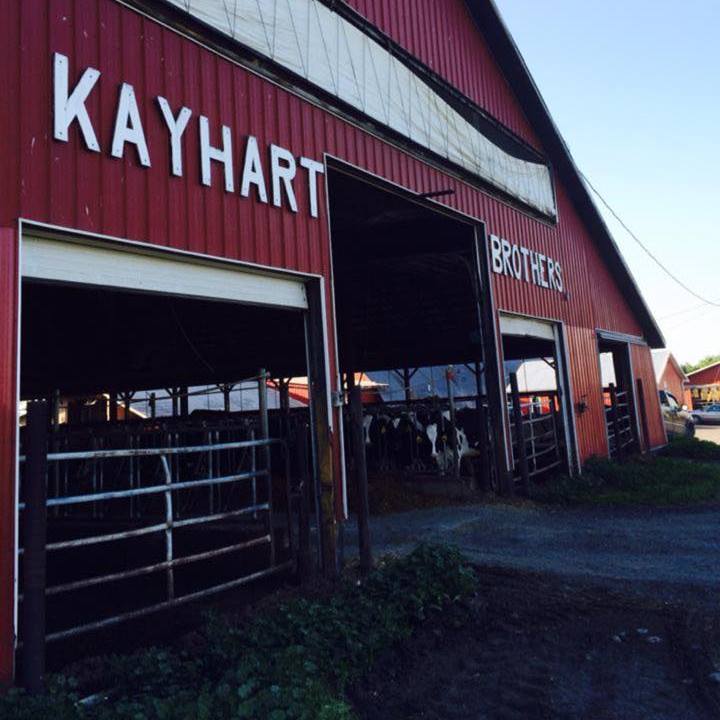 Meet the Farmers Behind Breakfast on the Farm

In addition to leading their businesses, local dairy farmers are active members in their communities.  From their towns, to area schools and churches, farmers are serving and leading.  What better way to support them back, then coming out and enjoying a great morning on the farm!

In 2018 two Vermont Breakfast on the Farm events are set for June 23 and July 28.  You’ll enjoy a free pancake breakfast and take a self-guided tour of a dairy farm where you can talk to farmers and volunteers from the dairy community about everything from cow care to how farms protect our environment.

In June attendees will experience beautiful, rolling green hills at the Gervais Family Farm in Enosburg Falls.  The farm has been in the family since the 1960’s, when Robert and Gisele Gervais purchased the original farm and started out with 35 Jersey cows.  As the family grew, so did the farm!  Now, the Gervais Farm includes three locations: two Holstein dairy farms, and another goat and cow operation.  All told, the Gervais’ milk more than 1,800 cows and care for over 3,000 acres of land.

Eleven of the family’s 15 children (yup, 15!) still work on the farm, and each has their own area-of-expertise.  Robert and Gisele’s four sons have taken over a bulk of the work.  Clement handles the cows and barns, Larry feeds and crops, Charles originally handled mechanics and cropping, but has since moved on, and Paul, cares for the young cows and calves.  Robert and Gisele’s four daughters manage the cow and goat operation: Boston Post Dairy.

And the next generation already has their boots on the ground at the farm!  Kati Lawyer-Hale, daughter of Theresa, and granddaughter of Robert and Gisele is now an active member, and partner at the family farm!

In 2009 the Gervais Farm debuted a new Cow Power methane digester, the first to do so in Franklin County, and just the 6th overall in the state.  The digester generates electricity by converting manure into methane, a process which sends 1.75 million kilowatt-hours of electricity per year back to the grid to power the equivalent of 200 homes!

The Gervais’ have adopted other sustainable practices including aerial seeding of cover crops to keep truck and tractor traffic of fields.  They also utilize dragline systems which pipe manure to fields instead of trucking, utilize manure injection to prevent runoff, and rely on GPS tracking on their tractors to accurately plant their crops and apply manure.

Thanks to the work they’ve done on their farm and in their community, the Gervais Family Farm was named the 2013 Vermont Dairy Farm of the Year, honoring their outstanding work in the Green Mountain State.

The fun and learning doesn’t stop in Enosburg Falls!  In July, visitors will head south to Kayhart Brothers Dairy Farm in West Addison!

Nestled along shores of Lake Champlain, Kayhart Brothers Dairy spans 1,800 acres of lush farm land.  The Kayhart family purchased the 80-cow farm in 1979 when Lee and his wife Pat wanted to own their own business.

As the years passed, the couple became parents to two sons and a daughter.  In the 1980’s son Steve left home to attend college, while brother Tim joined the marines.  By 1992, the two brothers realized they were missing life on the farm, and returned to become business partners with their parents, and helped to shape the future of the farm.

In 2010, the brothers officially took over operation of the farm.

For both Steve and Tim, the quality of their milk is a major point of pride.  The farm generates more than 6,000 gallons of milk per day, one of the highest outputs in Vermont.  But for them, quality is just as important as quantity, and that’s easy to see thanks to the multiple milk quality awards along with a Dairy of Distinction Award.

In 2017 the Kayhart Brothers proudly completed a new state-of-the-art milking parlor and barn, just down the road from the family’s original barn location.  It’s a step the two brothers say will set up their family for continued success for generations to come.

Whether it’s new barns, the latest technologies, or getting up close and cuddly with a cute calf, you’re sure to see something new, and have a great time at Vermont Breakfast on the Farm! Be sure to reserve your free tickets on April 1st when they are available at VermontBreakfastOnTheFarm.com/get-tickets.

Both the Gervais’ and Kayharts are dedicated, hard-working families that are proud to provide a source of nutritious food for our region and beyond.  Be sure to come out in June and July meet them, and say thanks for all that they do!